In 1666 Sir Isaac Newton discovered gravity. The legend is that he discovered this when an apple fell from a tree and hit him on the head. There is no actual evidence of that. But it is true that he figured out what gravity was by watching apples, among other things. It was actually quite simple. He noticed that when an apple on a tree moved from a resting position, it fell to the ground. He realized that “something” was making that apple fall. The result was his law of gravitation. Sometimes the most important discoveries happen just like that. Someone just sees the obvious and then tries to figure out why this is happening.

This reminded me that when we first learned about COVID all the really smart scientists came to the exact same conclusion. They said we could never hope to stop COVID from spreading, but we could flatten the curve. You may remember all the charts and graphs that showed how locking things down, for a while, would flatten the curve. That would allow hospitals to gear up with PPE, additional ICU beds and ventilators. That, by the way, is exactly what happened. Remember how during the peak of the COVID outbreak in 2020, Governors Newsom and Cuomo both admitted that the Trump administration had geared up to prepare for the peak and they had to admit they had EVERYTHING they needed. That was remarkable considering the fact that both Governors are liberal Democrats who hate Trump.

Then I heard something interesting. In South Africa, where the COVID omicron variant appears to have originated, Doctors there reported that while omicron spread amazingly fast, it was not very lethal. So far, I am aware of only one omicron death in the U.S. and the doctors in that hospital were quick to report that the person who died did have the omicron variant but that is not necessarily what killed him. He turned out to be extremely sick before he got COVID.

This caused me to ask a simple and obvious question that no one else seems to be asking at all. What if, with this version of COVID, we shouldn’t stop trying to flatten the curve, but rather shorten the curve. Actually, golfer Phil Michelson said something similar to that recently. Right now, everyone is freaking out that COVID is spreading very rapidly because of the omicron variant. But what if that is actually a good thing. What if the rapid spread of a mild version of the omicron variant is a good development, and not a bad thing at all. Think about this. If this spreads really rapidly, then the illusionary herd immunity that real scientists embrace and the Dr. Fauci’s of this world ignore, solves the problem. So, I did five minutes of research, which means I googled this. Here is what I found. Decide for yourself:

Below is a graph of new COVID cases In South Africa, where the omicron variant first appeared. 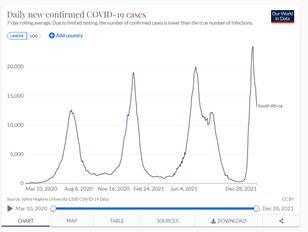 Notice that each cycle had a spike followed by a rapid decline. The difference is that the length of the cycle for the omicron variant appears to be much narrower. In other words, it peaked faster, and it is declining faster. Now look at the same graph for the U.S. 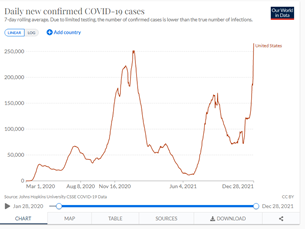 Note the obvious difference. We did flatten the curve in the U.S. But ultimately appear to have pretty comparable results, just at a later date. Now we see this rising rapidly, as it did in South Africa, and it seems logical that the decline will also be very rapid, as is already happening in South Africa. If this is correct, that new COVID cases in the U.S. will start to decline very rapidly. That might be happening already if we weren’t so desperate to test people who have no symptoms. But even in the U.S. it is bound to happen, for the exact same reason. When you flatten the curve, you get comparable results over a longer period of time, but when you shorten the curve, you also get comparable results only over a much shorter period of time. When you combine the fact that so many people in the U.S. have been vaccinated and the documented, but ignored, facts of natural immunity, the faster COVID spreads the faster we get herd immunity and the sooner it is gone.

I think a lot of people may be shocked to see this happen in a noticeably abbreviated period of time. It seems possible, if the pattern holds true, that we will start to see new COVID cases drop in half almost daily. And the good news is the faster it spreads now, the faster it goes away. Ironically, by Joe Biden giving up and saying there is no federal ability to manage this, he may have accidentally done exactly the right thing. Doing nothing may turn out to be a brilliant strategy. I doubt that he understands that. I am sure his fawning supporters in the MSM do not understand that and I am even more certain the Dr. Fauci’s of this world will try to pretend this is not happening.