In 1818 a treaty between the United States and the United Kingdom arranged for joint control over the Oregon Territory. It was no surprise that the vast majority of people who actually settled there were from the U.S. In 1844, James Polk, a real dark horse, ran for President and defeated Henry Clay with the slogan “54 40 or fight.” Eventually the United Kingdom reluctantly agreed to accept the 49th parallel. In case you are interested, here is a map showing the 54 40 U.S. claim and the current border. 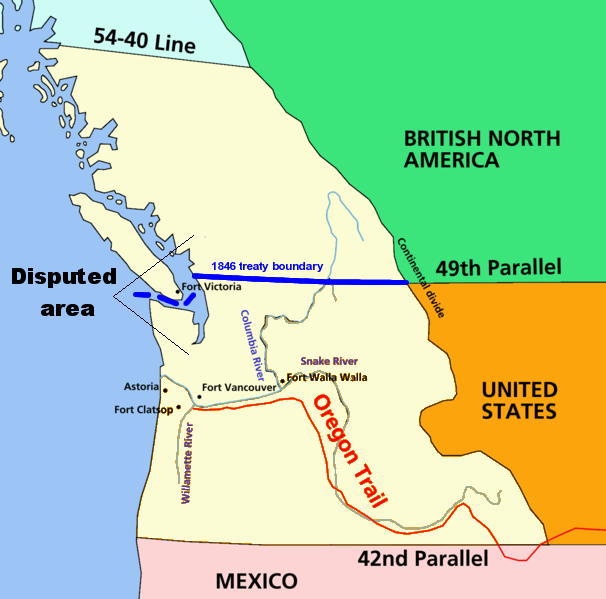 Polk got four things done as President that really matter. He did settle the boundary dispute with Great Britain. He did reduce the tariff between the north and the south. He did propose restructuring the U.S. Treasury and most significantly he acquired California from Mexico.

Polk was responsible for the Mexican American War which resulted in the Treaty of Guadalupe Hidalgo. Mexico lost close to one third of its territory and the United States took control of California, Utah, Nevada, Arizona, and New Mexico. In addition, this treaty was signed just before Gold was discovered in California. Whether one considers Polk to be a greedy imperialist or a gifted leader, it is hard to imagine the United States without the territory gained as a result of the Mexican American War.

Today we have another 54 40 fight on our hands, but it has nothing to do with any border. It is rather regarding the election to recall Gavin Newsom. Most polls show that 54% of Republicans are totally engaged to get rid of Newsom, while 40% of Democrats are energized to keep him. The issue will be decided on September 14, 2021. If 54% of Republicans vote and only 40% of Democrats vote, Newsom is toast. The margin would be too great for the traditional ballot harvesting and fraudulent votes to overcome.

The polls show this to be close, and Newsom is looking and acting terrified. There is a desperate attempt to scare people into voting for him, claiming that vaccine and mask mandates are necessary for our survival. Barack Obama, Joe Biden, Elizabeth Warren, Bernie Sanders, Amy Klobuchar, and Kamala Harris have all campaigned for Newsom. All have argued that recalling Newsom is akin to committing suicide.

The personal assaults against the top Republican, Larry Elder, have been way over the top. A woman, wearing a monkey face threw an egg at him. Imagine that being done to a black Democrat running for office. The MSM would have gone hysterical. When it happened to Larry Elder, they just ignored it. He has even been called the black face of white supremacy.

What is astonishing is that no one, including Newsom, is even pretending he is doing a good job. They have chosen to fight this battle solely on saving us from COVID and right-wing Trump Republicans. I am not sure that is going to work. We better pray this does not work. If other Republicans and independents see those commercials the same why I see them, Newsom is making a huge mistake. They are insulting and infuriating. They are making blatantly false accusations against Elder, mostly that he is an Anti-Vax, Trump Republican. Elder actually is vaccinated and supports vaccination, he just is against mandatory vaccinations.

The ads are saying that Newsom will require vaccines for all teachers and health care workers, and he will demand students wear masks in school. Perhaps I am wrong, but this seems like an insane argument. Some of the strongest voices against mandatory vaccines are health care workers. School Boards all across this state are facing loud and angry protests against mandatory mask mandates for schools. It is obvious that Newsom is more terrified of the California Teachers Association union than he is of the citizens living here. If the Newsom strategy works, we are in for a very tough year. He is likely to double down on the insanity, convinced he has a mandate to micromanage COVID. But, if he loses, it will send shockwaves across the political landscape. Those shock waves will go far beyond California, they will spread across the country and potentially the globe. This is literally coming down to a choice between being governed solely by irrational fear based on continually evolving and questionable science or a return to normalcy.

The bottom line is that if Republicans do not come out in force with a 54/40 turnout advantage, we are going to be fighting Gavin Newsom for the next 18 months. It will be a fight that no one, on either side, can possibly win.

54 40 or fight. Sounds like history is repeating itself, again.