Anyone living in Northern California is very familiar with Turkey Vultures. They are huge and they glide around high in the air. People sometimes mistake them for Hawks or even Golden Eagles. But Turkey Vultures are not birds of prey, they are scavengers. They show up after someone else has already done the heavy lifting. We once had about 20 of the show up, all sitting in a row on our back fence. Further investigation showed that a racoon had chosen our backyard as his final resting place. The Turkey Vultures were doing their job, making sure he rested in pieces. By the time they were done, there was not much left.

To the uninformed, from a distance, a Turkey Vulture may look impressive. But if you see one close up, like all vultures, they are ugly as sin. I am glad we have them because they are good at cleaning up a real mess. But their primary function is not to fix things, it is to devour the remains.

Sometimes it seems like our entire political system is dominated by the human version of Turkey Vultures. These people have no solutions to anything, but they are brilliant at picking over the remains in the event of a convenient disaster. CNN was the Turkey Vulture Network. While Trump was President, they were brilliant at finding any potential flaw and if that failed, they invented things. The only thing that mattered to them was picking on Donald Trump. But they missed something important. When Donald Trump was gone, they were left without a purpose. They are too terrified to pick on Joe Biden, although he is the ultimate target of opportunity. The problem for the MSM is that if they admit how awful Joe Biden is as President, they will have to address their role in making this fiasco possible. At least in real life, Turkey Vultures seldom kill anything. The MSM worked double overtime to get rid of Donald Trump and found themselves faced with his replacement, a rotting corpse even they can’t stomach.

Jim Acosta made a career out of being rude and insulting Trump. To people like Hollywood celebrities, he was a hero. But to most of us he was just disgusting. Well, once Trump left office Acosta couldn’t continue his rude and insulting act with the Biden administration. For one thing, they don’t bother to answer questions from anyone. In addition, if Acosta were as rude to Biden as he was to Trump, he would have been hounded off the stage. So, Acosta chose a new career, as the primary weekend anchor for CNN. Great move for Acosta, huge mistake for CNN. Prior to Acosta taking over CNN ratings were already tanking. But when Acosta took over, he turned a trickle of viewers abandoning CNN into Niagara Falls. CNN ratings since Acosta took over have dropped an astonishingly 36%.

LOL: Ratings For “CNN Newsroom” Have Fallen 41% Since Jim Acosta Took Over (trendingpolitics.com)

Actually, it may be closer to 41%. By any measurement this is beyond bad. The problem here is that CNN and the rest of the MSM were nothing more than Turkey Vultures. They had no mission in life other than to pick over Donald Trump. Only this time, as vultures, they made a huge mistake. Donald Trump is not actually dead, and it turns out that he was and is the voice for millions of dissatisfied Americans. He has been replaced by Joe Biden, who is truly awful, but the MSM cannot bring themselves to report accurately on this. They are still in the mode of let’s pretend this is working. It isn’t. When I see Joe Biden, I do not see the President of the United States. It is impossible to believe that he is really calling the shots. He is too busy trying, and failing, to remember the route to the exit. Just recently he was on a climate change call, with leaders all over the world, Biden was the only one stupid enough to do this wearing a face mask.

Look for yourself, there is Putin, in the middle, clearly in charge, and there is Joe wondering how long before his next bathroom break. I am sure the rest of the World Leaders on this call were having a hard time suppressing the giggles. We have literally made ourselves the laughing stock of the world. 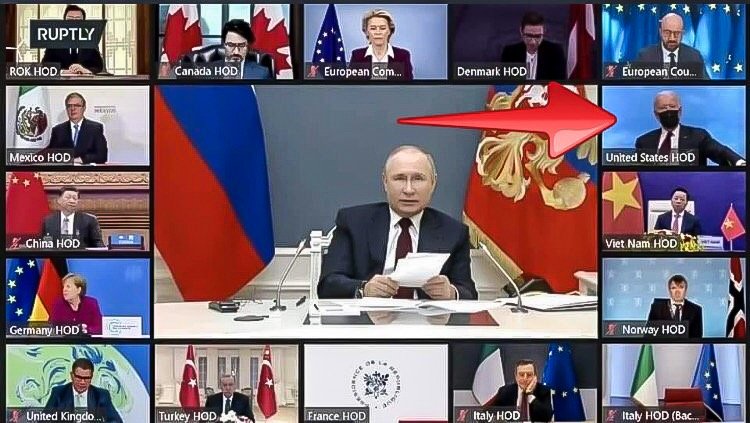 I actually like Turkey Vultures. They are fun to watch. But there is a reason our national bird is the Bald Eagle, not the Turkey Vulture. We didn’t earn our independence by picking over the bones of dead corpses. We won it clawing our way to victory. Most people understand that. The others are still watching CNN and pretending this resembles the news.