At some point, even the MSM will realize that the Biden Administration is a complete disaster. They may never admit it, but they will recognize it. This past week was an unmitigated disaster.  Biden started by telling such outrageous lies about the Georgia Voter Registration law that even the Washington Post noticed and gave him four Pinocchio’s. But perhaps the biggest mistake was in the way the U.S. handled the visit by the Japanese Prime Minister. If there is one alliance that is very strong and vital to U.S. interests it is with Japan.

Yet, when the Prime Minister arrived at the White House no one was there to greet him, other than the guard at the door. The only reason this didn’t immediately blow up into an international incident is that it was assumed that the Biden Administration was only stupid and not deliberately insulting. The Prime Minister was greeted, eventually, by Kamala Harris, who choose the occasion to trash her own country. She raged about the shooting in Indianapolis and didn’t bother to welcome Prime Minister Yoshihide Suga until she was done ranting. It was disgraceful and whether the Biden Administration realized it or not, it caused the Prime Minister to lose face. Then, after spending over an hour with Kamala Harris, Prime Minister Suga was finally brought to the White House, Biden said the following:

“And Yosi, I know how proud you are of people of Japan are.”

Brilliant, absolutely brilliant and such powerful English prose. In addition, Biden botched his name. His name is Yoshihide Suga.

It would have been the equivalent of Mr. Suga responding: “Thanks Joey.”  Then Biden doubled down on the insults with the following:

The only good news is that Prime Minister Suga does not understand English, so hopefully the translators softened the blow while translating. But the rest of the world understood and that became obvious with the way China treated John Kerry.  Now John Kerry is, in my opinion, the lowest level of pond scum. So, seeing him humiliated, by anyone, any time, under any circumstances is normally viewed as a good thing by me. But in this case, insulted John Kerry is insulting the United States of America.

John Kerry was in China to sign another climate change deal that China will quickly ignore. They didn’t even wait for Kerry to clear the Chinese border before Chinese Vice Foreign Minister Le Yucheng announced that China was unlikely to make any new pledges at the upcoming Climate change summit. Then, instead on giving Kerry a ride in an official vehicle, they literally put him on a bus.  Here is a picture of him, sitting in the back of the bus, clutching his worthless facemask. 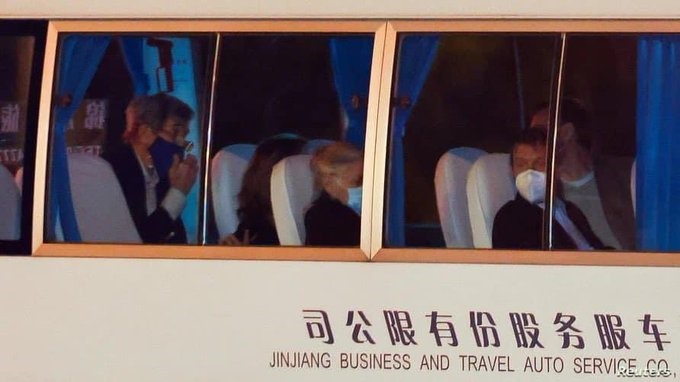 It is also reported that the Communist Party no longer arranges for officials at the state councilor level to meet Kerry. Kerry may be too arrogant and stupid to realize he has been humiliated but everyone in China understood.

Ironically, the non-African American, black female Vice President of the United States, recently converted to Asian because her mother immigrated to the U.S. from India, apparently knows nothing about face despite her strong Asian heritage.

This would be funny if it were not so serious and potentially deadly. Mr. Suga may not have understood the totality of the insult while in the White House, but he almost certainly was enlightened when he returned home. Fortunately, the relationship with Japan is probably strong enough to endure this, but I doubt they will pay much attention to anything coming from either Joe Biden or Kamala Harris.  I wouldn’t be surprised if the next state visitor from Japan is a Chef bringing Sushi to the White House. Expired Sushi.

Sometimes Hollywood does a good job of explaining real life. If you want to see an example of this, watch “Rising Sun,” a movie produced in 1993 starring Sean Connery. This does an excellent job of explaining face regarding Japanese Executives. Ignore this to your peril.

The Trump White House was routinely accused of being naïve and rude regarding foreign affairs. But the opposite is true. Even “Chairman” Xi Jinping, met with President Trump and despite their difference, the meeting was polite and productive. One would think that with all the Obama holdovers in the Biden Administration they would at least have people around who understand the rules of diplomacy. But if that is true, it is certainly not very evident.

The good news is that Biden is so weak that no foreign leader is likely to bother attacking him. What they will do is ignore him. In some ways, remarkably, this may be better than if they took him seriously. His proposed solutions to every challenge are so ridiculous that we may benefit if they are just ignored.  A sad situation for sure. The only thing certain is that sound of this face plant was heard round the world.