The good news is that Joe Biden did not blunder his way into an unnecessary war, yet. The bad news is that he managed to lose, without firing a shot. Donald Trump handled the Ukraine perfectly. He sent the Ukraine weapons, warned Putin to back off, but did not push a confrontation. However, the Ukraine probably thought they had a real friend in Biden, after all he was well-financed by the Ukraine. So, the President of the Ukraine started tweaking the Russian Bear. Apparently, he thought the U.S. and NATO would have his back. He was wrong. Earlier this week Washington announced that they were going to send two warships into the Black Sea. Russia warned them to stay away “for their own good.” Turkey cancelled permission for those ships to pass through the straits that lead into the Black Sea. Today the United States announced that it had changed its mind. In the meantime, Putin ordered invasion stripes painted on his tanks poised at the border with Ukraine. Unlike Biden, Putin is ready, willing, and able to order military action.

This is a humiliating international defeat. So much for Trump being Putin’s puppet, it is Biden who is dancing merrily on Putin’s strings. It is hugely embarrassing for the U.S. to back down in a situation like this. Frankly, this encourages our enemies to slap us around because they have zero fear of the U.S. under the leadership of Joe Biden.

Other countries have already figured this out. None of the NATO countries jumped in to support Ukraine. Ukraine learned, the hard way, that the U.S. under Democratic leadership is famous for abandoning people stupid enough to trust us as allies. If you think this is harsh, research the way we started the Vietnam War and the way we ended it. Then check out how Obama handled Iraq. Remember the invasion of Iraq had strong bi-partisan support.

Biden is leaving Afghanistan and the Taliban is likely to shoot at our troops on the way out. They signed a peace treaty with Trump. Less than three months later they just announced  victory over the U.S. in response to the action taken by Biden.  They missed the CNN broadcasts praising Biden for his brilliant diplomacy. For them this is perfect, they can just ignore us. In the meantime, our NATO allies also have troops in Afghanistan and the countries who are there basically at our request are now being abandoned. This is unlikely to end well and smart NATO allies in Afghanistan will be trying to beat us to the exit.

This is an incredible amount of damage to our foreign relations in a record amount of time.  The good news is that we are unlikely to get involved in a shooting war. The bad news is our enemies will get what they want without one. Every country on earth has figured this out. They flat out don’t respect the United States under Joe Biden. They absolutely do not fear us. Israel obviously gave up on Biden dealing with Iran so one of Iran’s nuclear facilities was miraculously destroyed, again, by an incredibly convenient accident. Israel admits nothing but is having difficulty restraining the smiles.

Now look at a map, check out the locations of Israel and Iran. In between are those Arab countries who signed peace deals with Israel, under Trump. The good news is that thanks to this huge diplomatic achievement by Trump, Israel has support from Arab states in the area for the first time. They do not like Israel, buy they fear Iran. The also love all that oil income. The bad news is that Biden is trying to undermine Israel, again.

In the meantime, Joe Biden had a photo op of himself, walking alone, on the graves of soldiers who died in Afghanistan, while bravely wearing a mask. He was also carrying an umbrella, although it was not raining. 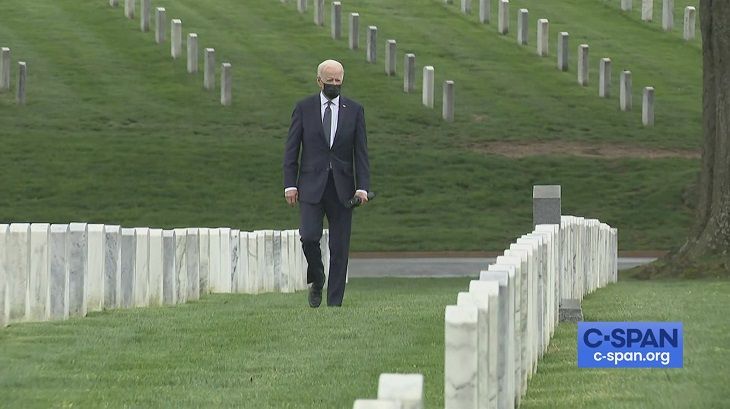 As combat veteran I can guarantee that few people who are wearing or who ever wore our nation’s uniform were impressed. In addition, we are reminded that when Obama got a chance to kill Bin Laden, Joe was the only one stupid enough to think this was a bad idea.

We are headed toward a long and very hot summer. Expect violent protests all over the country and expect them to be handled poorly. We are already seeing higher food prices, higher gas prices and wood prices increased by about 85%. The cost of everything is going up. The ability to use anything is going down. But something else will start happening this summer. The 2022 election campaigning has already started and by mid-summer it will be a full-throated political campaign. The bad news is that Joe did an incredible amount of damage during his first 100 days. The good news is that the “honeymoon” is already over. Nadler proposed stacking the Supreme Court by adding four new justices. Nancy Pelosi responded by announcing there was zero chance she would allow the House to vote on this act of insanity. Perhaps she noticed that her margin in the house is down to 3 seats. If only 2 Democrats cross over on any issue, she loses.

This will be the summer of abandonment. Abandonment of idiot lockdowns, masks, and social distancing. Abandoning our allies in places like Afghanistan. And abandonment of support for the rapidly sinking Biden Administration ship of state.  It was obvious before. Now everyone is singing the same song: “Crimea River.” It is not a love song.

NOTE: Yesterday I got the name and the facts wrong regarding the Capitol Police officer killed. The one who died, perhaps, because of the Capital riot, was Brian Sicknick. The officer who was recently honored by Biden was William Evans. He was struck by a vehicle driven by a Louis Farrakhan reporter. They should be honored for their service. I apologize for the error.