Here is a link to an eyewitness account by four military veterans. Obviously, I cannot verify any of this, but it seems consistent with what we saw on TV. It would also explain a lot.

Ben Wetmore is an attorney. He wrote this article.

The FBI is admittedly on a nationwide manhunt for any Republican who participated in this event.

FBI on Twitter: “Do you see anyone you recognize? The #FBI is still seeking information to help identify individuals who actively instigated violence on January 6 in Washington, D.C. Visit https://t.co/o9rDVDsk5S to see images from current cases, and submit tips to https://t.co/buMd8vYXzH. https://t.co/R9JqN8TqpP” / Twitter

Here is a picture of one of those terrorists, gleefully sent to the FBI as an important tip. 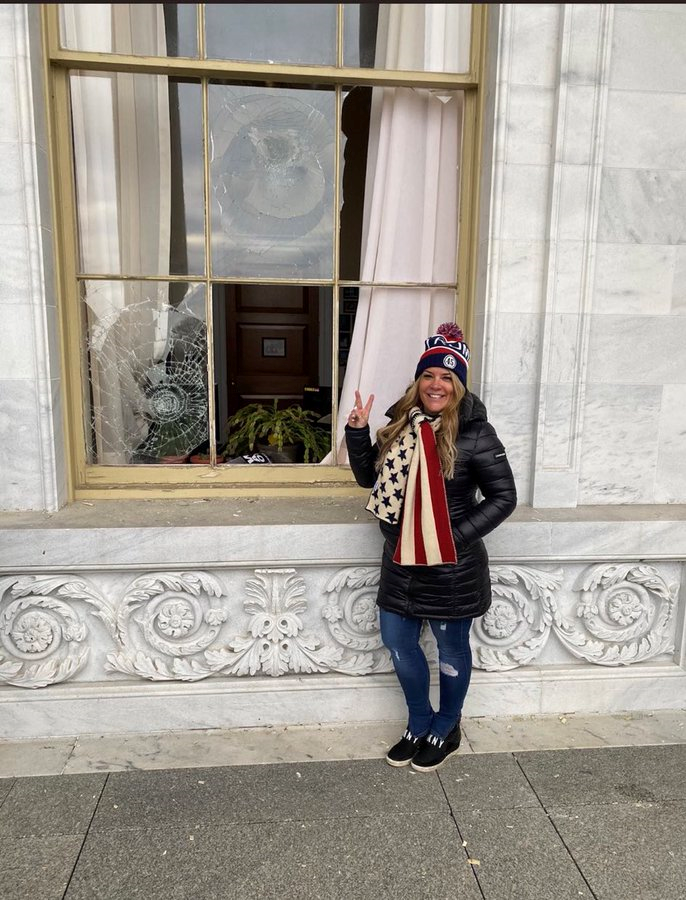 FBI Assistant Director Steven D’Antuono says there was “no indication” Antifa played any role in the riots. Wow! Now you know why the FBI didn’t see any evidence of voter fraud either. Does anyone remember the FBI doing this kind of nationwide manhunt for Antifa when they were burning down cities last summer? Me

One of the people arrested by the FBI was a WV Republican representative recently elected. His crime was taking an Instagram picture from inside the Capitol. This smells like the same FBI that sent storm troopers to arrest Roger Stone, when he clearly was no threat to anyone.

The FBI is already raiding the homes and offices of Republican Tennessee lawmakers. One wonders if similar energy will be spent looking for Antifa members.  Antifa has been doing much worse, for months. Any evidence the FBI was hunting them down? Silly question. The FBI cannot be distracted by something as trivial as that.

Here’s video of another terrorist.  Judge for yourself:

There is no doubt there were some Republicans involved and a lot of stupid people, but at worst this was a peaceful protest that got out of control. Pretending this was an attempt to overthrow the government is absurd. In addition, this sure looks like something Antifa would do and a lot of people, other than those interviewed by the FBI, are reporting that.

You can literally feel the anger. It is reported that 45% of Republicans believe the protestors were justified in their actions. That is one report I believe. They have a point. Democrats did exactly this in 2018, when they invaded the Senate Office building atrium in a failed attempt to block the nomination of Justice Kavanaugh. The press did not call this an insurrection, or an invasion of sacred ground, or domestic terrorism. They were too busy cheering:

How angry are people?  An airline pilot had to threaten to land the plane if people didn’t stop chanting U.S.A. Here is a video of that:

This video was taken by a pastor on the plane.

Nancy Pelosi and Chuck Schumer say they will file papers to impeach Trump on Monday. Pelosi literally asked the Joint Chiefs of staff to take away his access to the nuclear codes. She thinks he is unhinged. If she wants to see someone who is unhinged, get a mirror.

The MSM is desperate to blame all this on Trump and his delusional despicable supporters. The fake news is on high alert. All Republicans who believe this election was stolen are worse than criminals. They are traitors. Crucify them. Round them up. They must be destroyed.

Our new President, the man who will unify this country said: “These weren’t protestors – they were rioters, insurrectionists, and domestic terrorists.”

Rep Cori Bush is calling for expulsion of any Republican member of congress who incited this violence. She means anyone who says this election was stolen:

“I believe the Republican members of Congress who have incited this domestic terror attack through their attempts to overturn the election must face consequences,” she tweeted. “They have broken their sacred Oath of Office. I will be introducing a resolution calling for their expulsion.”

Democrats, led by Schumer, Pelosi, Biden, and Harris have declared war on any Republican who dared question this election before Biden has even been sworn into office. When people threaten to destroy you, listen to them.

These people are literally insane. They are also way out over their skis. There were too many people there to cover this up. Too much news coverage. Too many smart phone videos. Too many undercover reporters. They cannot suppress this and if they continue rounding up people, like the ones shown above, it is impossible to predict the results, but a nationwide protest is guaranteed. Frankly, they have already done more than enough to generate that. All that is that is necessary is for more people to understand what is going on. Now is the time to share. The MSM, Twitter, Facebook and Google will desperately try to cover this up, but that ship has sailed.

I believe this has already exploded and it is only a matter of time. This is unbelievable, yet incredibly all too true.